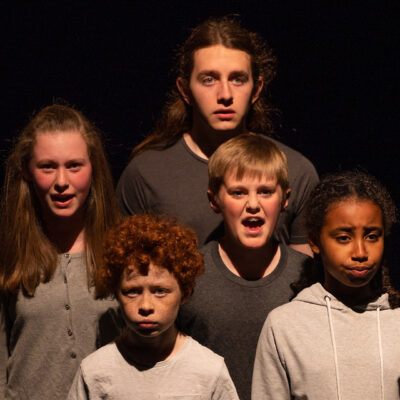 Is survival enough? Struggling to live in a post-apocalyptic world, Becky had never seen a plane until the strangers landed, offering a better future. But who are these outsiders… and how can Becky leave when her best friend is missing?

The skeleton of a hangar in an airport terminal, 7 years after the world has been devastated by war and environmental catastrophe.

The Missing enter and start to manipulate their surroundings to fit the story.

They move boxes into place like stepping stones in a river.

They can speak either in unison or individually, as desired.

THE MISSING:   We are the Missing.
This is not our story.
It will never be our story.
But the story calls us.
We are its voice.
Long ago, the arrogance of humanity ruined this planet.
These people of history we know as “The Pasts”,
The Pasts who dropped plastic into the seas and boiled them dry.
Ah. There it is.
That look in your eye.
You think you’ve heard this story before.
You haven’t.
The oceans which covered this planet retreated,
Leaving a bone-dry skeleton behind.
The Pasts who were left fought a war on those dry bones,
Using weapons never seen before.
Weapons that targeted the useful
And spared the useless:
Children, invalids, extra mouths to feed;
Until they were the only ones left.

At that moment, a group of survivors emerges: CARA, JAKE, BONNIE, FINLAY, HOLLY, LEWIS and finally BECKY. They are jumping from box to box, passing a box of supplies between them. The Missing encircle them as they do this, moving the boxes and almost daring them to fall.

THE MISSING:   Almost all voices on this planet were silenced.
But slowly, these young survivors emerged
Parentless.
They found each other
Looked after one another,
With only one goal:
Survive together.

Most of the group have made it to the edge of the boxes. BECKY and LEWIS are the only ones left. At that moment, there is the distant sound of a plane in the air. They all look up in astonishment.

CARA, though amazed, forces herself to stop looking up and focus on BECKY and LEWIS.

THE MISSING:   For the youngest
This world is all they’ve ever known.

BECKY and LEWIS oblige. HOLLY takes the box from them.

The older members of the group turn and look to BONNIE, who is slightly embarrassed.

CARA squares up to BONNIE but thinks better of having an argument right now.

They don’t leave. Instead, the scene shifts around them. 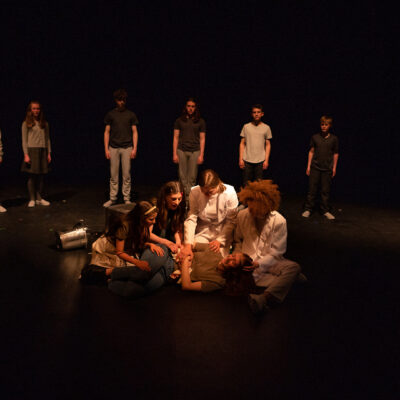 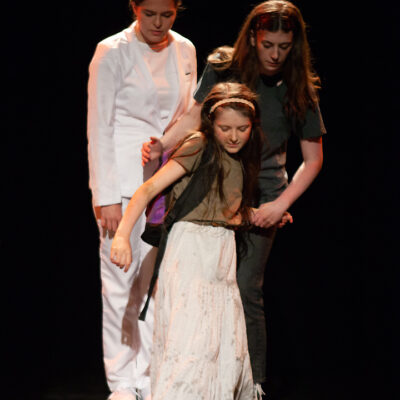 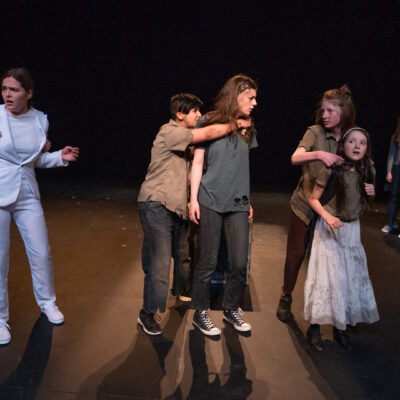 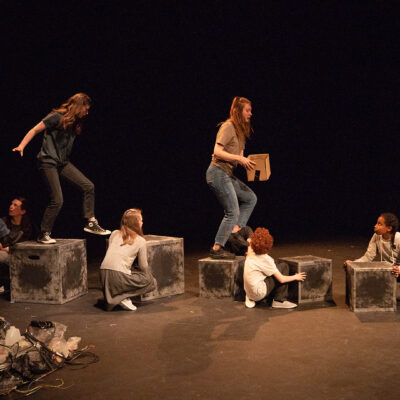